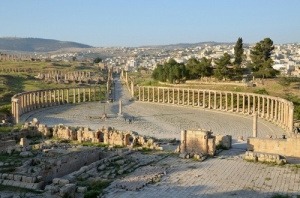 Pick up from your hotel at the Dead Sea and head north of Amman to visit Jerash, which is nestled in a quiet valley among the mountains of Gilead.

It is the grandeur of Imperial Rome being one of the largest and one of the most well-preserved sites of Roman architecture in the World outside Italy. Its paved and colonnaded streets, soaring hilltop temples, handsome theaters, spacious public squares and plazas, baths, fountains and city walls pierced by towers and gates remain in exceptional. In Jerash you will see Hadrian’s Arch, Oval Plaza, The Cathedral, The North & South Theater, and The Nymphaeum.

Then transfer a short distance through a beautiful pine-forest and olive groves, reaching the city of Ajloun, here you will find Al-Rabid Castle; the 12th century Castle built by one of Saladin’s lieutenants in the campaign against the Crusaders.

Then to Umm Qais, which belonged to the famous Decapolis, a union of 10 cities, founded by Alexander the Great. Here you have an overwhelming view over the north Jordan Valley, the Golan Heights and the Sea of Galilee.

Rate Per Person in Private Tour in $USD :

All Transfers in private, A/C, new vehicle with English speaking, assisting driver
Entrance fees to Jerash, Ajloun & Um Qais
English Speaking Guide in Jerash for 1.30 hr
Lunch in Jerash
Mineral water on board of the vehicle.

Rate does not include: