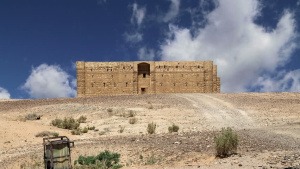 Pick Up Point /Starting from  : Amman Hotel or Residence

This morning your driver will pick you up and you will head north from Amman to the Eastern Desert. You will visit three of the region's famous desert castles built by the powerful Umayyad dynasty in the — UNESCO-listed Qusayr Amra, Qasr Kharana and Qasr al-Azraq.  Qusayr Amra was once an Umayyad hunting hideaway. The impeccably preserved castle is now best-known for its 8th-century frescoes that depict hedonistic scenes of nude women, wine and wild times.

Arriving back in Amman you explore the city on a City Tour.  Amman, is a bustling modern city. The historical places are located in downtown, where you visit the Citadel with remains from the Roman to the early Islamic period. Located at the Citadel is the Archaeological Museum. You will stroll via the Souq, where you get an idea of everyday life, to the Roman Theatre from 2nd century with 6000 seats. Your driver will be with you to transfer you to the sites on the Amman City Tour but the driver cannot enter the sites with you. If you would like a guide for the Amman City tour this is additional cost of $70USD for 03 hours.

Rate Per Person in Private Tour in $USD  :

Mineral water on board of the vehicle