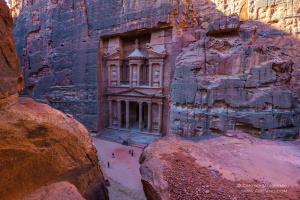 This is a 2-day tour to Amman, Madaba, Mpunt Nebo, and Petra, for those staying in Jerusalem, or other points in Israel/Palestine. It starts and ends in Jerusalem or elsewhere in Israel/Palestine (supplement applies). You will visit Jordan’s vibrant capital, Amman, as well as the smaller town of Madaba, see the stunning views from Mount Nebo, and finally explore the wonders of Petra.

Tour Itinerary of 2-Days Amman, Madaba, Mt Nebo and Petra From Jerusalem (Other locations upon request) :

Once arrived on the Jordanian side, we drive to Amman. There, you will have the chance to visit both the modern downtown, now the economic, political and cultural center of Jordan, and the old Citadel above the city, which includes the Temple of Hercules and historic palaces, as well as great views over Amman.

After that, drive to the smaller town of Madaba and discover the amazing Byzantine mosaics excavated in different locations throughout the town. Especially worth seeing: the ‘Madaba Map’, the oldest preserved mosaic map of the Holy Lands.

Continue to Mount Nebo and enjoy the view where, according to tradition, Moses looked across to the Promised Land, and later died and was buried.

In the evening drive south via the Desert Hwy to Petra.

Overnight in a hotel at Petra including breakfast.

On the second day you will visit Petra, one of the new seven wonders of the world. Carved into the red rocks of the desert cliffs thousands of years age by the ancient Nabataean people, Petra was hidden under sand for centuries before recently becoming accessible again. You will tour through the treasury, amphitheater, royal tombs, a monastery and much more, walk in the tracks of Lawrence of Arabia and India Jones, and discover why Petra was named “the rose-red city half the age of time”.

Depart Petra at 15:00 and return to King Hussein / Allenby Bridge, and then on to Jerusalem where you will be dropped off at your destination.