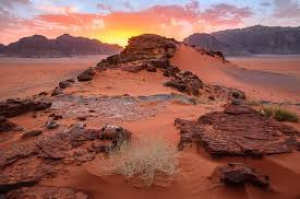 This is a 3-day tour starts with visiting Amman, Jordan's capital before exploring the ‘rose-red’ city of Petra, as well as the magic desert in Wadi Rum. It starts and ends in Jerusalem or elsewhere in Israel/Palestine (supplement applies). You will spend one night in Wadi Rum and one night in Petra.

Tour Itinerary of 3 Day Tour of Amman, Petra and Wadi Rum From Jerusalem (other locations on request)

Once arrived on the Jordanian side, we drive to Amman, to visit both the modern downtown, now the economic, political and cultural center of Jordan, and the old Citadel, which includes the Temple of Hercules and historic palaces, as well as stunning views of the modern city.

Then it’s time for you to stop for lunch in a local restaurant for authentic falafel and hummus, and try some sweet kanafeh for desert.

After you have finished exploring Amman you will be transferred via the Desert Hwy to Petra.

Overnight in Petra in a hotel with breakfast.

On the second day you will visit Petra, one of the new seven wonders of the world. Carved into the red rocks of the desert cliffs thousands of years ago by the ancient Nabataean people, Petra was hidden under sand for centuries before recently becoming accessible again. You can wander through the red canyons, discover the treasury, the amphitheater, royal tombs, a monastery and many other sites, and walk in the tracks of Lawrence of Arabia and India Jones.

Later that day, we will drive to Wadi Rum, watch the sunset and gaze at the stars in the night sky whilst enjoying the legendary hospitality of the Bedouin, before sleeping at the foot of the awesome mountains exploding out from the desert landscape.