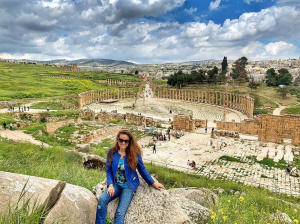 On the Jordanian side you will visit the 900-year old castle of Ajloun, built to ward off the Crusader armies at the key trade and pilgrimage intersection between Jerusalem, Cairo, Damascus and Mecca. From there, the tour continues to the ancient Roman city of Jerash – with its colonnaded streets, mosaics, baths, theaters, temples, and hippodrome an awesome blend of Eastern and Western architectural traditions.

Continue south to Amman, and where you will stay overnight.

Breaktast at the hotel. Drive to the town of Madaba and discover the amazing Byzantine mosaics excavated in different locations throughout the town. Especially worth seeing is the ‘Madaba Map’, the oldest preserved mosaic map of the Holy Lands. Continue to Mount Nebo and enjoy the view where, according to tradition, Moses looked across to the Promised Land, and later died and was buried. Drive on to the Dead Sea. Float and relax at one of the resort hotels. Enjoy the sunshine at the lowest point on earth, whilst trying out the invigorating mud bath to cleanse the skin. After taking in the beautiful sunset, we will continue south to Petra. Overnight Petra hotel including breakfast.

Today you will visit Petra, one of the new seven wonders of the world. Carved into the red rocks of the desert cliffs thousands of years ago by the ancient Nabataean people, Petra was hidden under sand for centuries before recently becoming accessible again. You can wander through the red canyons, discover the treasury, the amphitheater, royal tombs, a monastery and many other sites, and walk in the tracks of Lawrence of Arabia and India Jones.

Later that day, we will drive to Wadi Rum, watch the sunset and gaze at the stars in the night sky whilst enjoying the legendary hospitality of the Bedouins, before sleeping at the foot of the awesome mountains exploding out from the desert landscape.