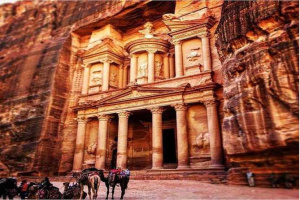 This is a 2-day tour to Wadi Rum and Petra for those staying in Jerusalem, or other points in Israel/Palestine. It starts and ends in Jerusalem or elsewhere in Israel/Palestine (supplement applies). Visit the majestic desert of Wadi Rum following in the footsteps of Lawrence of Arabia, before exploring the wonders of Petra. On this tour you will stay overnight in Petra which gives you the chance to enter the site early in the morning.

Tour Itinerary of 2 days of Wadi Rum and Petra (overnight Petra) Tour From Jerusalem (other places as requested):

You will be transferred approximately 3 hours to Wadi Rum, one of the most impressive desert landscapes in the world. Explore the wilderness of the desert on a 04 - 05 hour 4x4 tour, cimbing sand dunes, seeing ancient inscriptions and towering rock bridges.

At the end of your tour you will be transferred to Petra where you will spend the night.

Overnight at Petra hotel including breakfast.

On the second day you will visit Petra, one of the new seven wonders of the world. Carved into the red rocks of the desert cliffs thousands of years age by the ancient Nabataean people, Petra was hidden under sand for centuries before recently becoming accessible again.

You will tour through the treasury, amphitheater, royal tombs, a monastery and much more, walk in the tracks of Lawrence of Arabia and India Jones, and discover why Petra was named “the rose-red city half the age of time”.