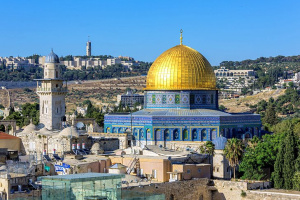 In This tour experience  our 7-Day Tour to Jordan & Israel/Palestine. Discover the rose-red city of Petra, visit Jerash which is considered one of the largest and most well-preserved sites of Roman architecture. You will also visit Wadi Rum which is one of the world's most beautiful deserts more than just a sea of rolling dunes. Experience Amman in a city tour, float in the salty waters of the Dead Sea at the lowest point on earth. Experience history and religion in Jerusalem, visit Bethlehem, the birthplace of Jesus. Also, stop at the Church of the Primacy where Peter was told by Jesus that to continue his work, and try walking on water. On to Nazareth, the boyhood village of Jesus, now a bustling city.

Breakfast at the hotel. Early morning pick up from the hotel lobby and drive approximately 2.5 hours via the Desert Highway to the rock city Petra, Jordan's main attraction and an UNESCO World Heritage Site. Petra was established around the 6th century B.C. by the Nabataean Arabs, a nomadic tribe settling in the area. With a sophisticated water supply and distribution system the city could prosper and the Nabateans founded a commercial empire that extended into Syria and controlled the main caravan routes at that time. Meet your private guide at the Visitor Centre and start the tour on horse back or on foot to the Siq, the narrow canyon with some votive niches. At the end of this gorge you will see the most beautiful monument of Petra, the Treasury, also known as Al Khazneh. Continue along the Street of Facades, the Royal Tombs and Pharaoh's Castle. Free time on your own before you return in the afternoon to the gate of Petra where you will meet your driver again. Drive 1.30 hr to Wadi Rum for overnight with dnner and breakfast.

Breakfast & Sunrise at the camp. Enjoy the wilderness adventure of a 4x4 tour of Wadi Rum, following in the footsteps of Lawrence of Arabia, climbing sand dunes and rock bridge. Meet your driver again and transfer to the Dead Sea. Float in the salty waters of the Dead Sea at the lowest point on earth & enjoy the lunch. Free time by your own and drive you to Amman.

Pick up from your door in Amman and transfer to King Hussein / Allenby Bridge Israeli Terminal. Drive to the Mount of Olives for a wonderful view of Jerusalem. Then go to the Pater Noster with the Lord's Prayer in different languages. From the Mount of Olives the traditional Palm Sunday route takes you to the foot of the hill and sees the Garden of Gethsemane with its ancient olive trees. Enter the Old City through the Dung gate to visit the Wailing (or western) Wall and view the Haram Al Sharif with the Al-Aqsa Mosque and the Dome of the Rock. Walk the Via Dolorosa with its Stations of the Cross till you arrive at the Church of the Holy Sepulchre, where Jesus was crucified and buried, and then rose again. Leave the city through the bazaars to the west by Jaffa Gate. Drive through West Jerusalem to see the various landmarks. Overnight at hotel in Jerusalem/ Bethlehem.

Depart from your hotel and drive North to Capernaum where you will see the Synagogue where Jesus taught and the other remains of this once prosperous town on the shores of the Sea of Galilee that became his adopted home. You will visit the Mount of Beatitudes, scene of the famous Sermon on the Mount, and Tabgha, where the miracle of the feeding the 5000 is said to have happened. Stop at the Church of the Primacy where Peter was told by Jesus that to continue his work, and try walking on water. Then on to Nazareth, the boyhood village of Jesus, now a bustling city.  At the Church of the Annunciation you will see visitors from all corners of the world, and this is reflected in the décor of the modern building. Finish tour and return to Amman via Allenby or the Sheikh Hussein crossing.