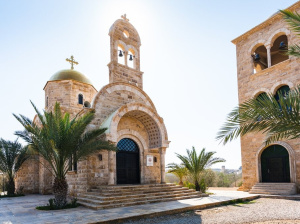 A 6 day tour that covers many of the biblical sites that Jordan has to offer including Bethany beyond the Jordan, the site where John the Baptist is said to have baptized Jesus, Mt Nebo where Moses gazed out on the Promised land and Petra which is associated with the Exodus.

Arrival to Queen Alia Airport. Our representative will meet you before customs to assist you with your free visa on arrival to Jordan. You will then be taken to your driver and transfer you to your hotel in Amman.

* Depending on your flight arrival time ask us about optional tours for this day.

This morning we drive to Umm Qais, the old Decapolis city of Gadara, with its spectacular panoramic views overlooking the Sea of Galilee. The basalt basilica is believed to be the site of Jesus' miracle of the Gadarene swine. We then drive to Jerash, one of the best preserved and most complete provincial Roman cities. With your English speaking guide, enter through Hadrian's Arch for a 2 hour tour of this remarkable city. Free time after the tour if you wish to continue exploring. Back to Amman.

Today you will be travelling through the lands that in the Bible were called Moab and associated with the Moabites. First stop is Madaba where in St Goerge Church you will find the famous 6th century mosaic map of the HolyLand. Next stop is Mt Nebo which is a short drive from Madaba. It is here that Moses is said to have stood and gazed out on the Promised land before he died and was buried there. Visit the old monastery and look out over the Jordan Valley, Dead Sea, Jericho and Jerusalem. Driving through the hills and valleys you will arrive to Machaerus (Mukawir). This fortified hilltop was once the home to a palace built by Herod the Great and the where Solomone peformed her dance which saw John the Baptist beheaded as a result. Descend into the Rift Valley to arrive at Bethany Beyond the Jordan, the place where Jesus was baptized by John the Baptist, where Elijah and Elisha crossed the Jordan, as well as the area where the children of Israel led by Joshua entered the Promised Land. Finally we drive to the Dead Sea, the lowest point on Earth, some 420 metres below the sea level. Enjoy floating on the surface of the waters seven times saltier than regular seawater. Check into your hotel and relax and enjoy using the hotel facilities.

This morning we travel along the Dead Sea Highway and into the land of Edom. Stop at the bottom of Wadi Al-Mujib then we continue to Lot's Wife Pillars. You will visit Lot's hillside cave near the town of Safi. Here Lot lived together with his daughters after they fled the sinful cities Sodom and Gomorrah. The Bible says Lot's daughters gave birth to sons; their descendants would become the Ammonite and Moabite people, whose kingdoms were in what is now central Jordan. Ascend the winding road up the Al Sharah Mountains to the wild natural reserve of Dana where we stop to enjoy the view and take photos. Next, we travel to Shobak Castle, one of the many Crusader castles found in Jordan. Shobak castle was used as a monastery until it was rebuilt by the crusader prince Baldwin I and used to guard the road from Egypt to Damascus.

Overnight hotel at Petra including breakfast.

At the time of Jesus and the Apostles, one of the Eastern Mediterranean's greatest trading centers was located in Petra. During the Exodus, Moses and the Israelites passed through the Petra area in Edom - local tradition says that the spring at Wadi Musa (Valley of Moses), just outside Petra, is the place where Moses struck the rock and brought forth water. Aaron, the brother of Moses and Miriam, died in Jordan and was buried in Petra at Jebal Harun (Mount Aaron).

With your guide, walk through the mile-long Siq to reach the city, passing the remains of Nabataean shrines, water channels, wall carvings and some of the original paving stones. See the magnificent Treasury as you exit the Siq, explore the Street of Facades, the Theatre, Royal Tombs, Colonnaded Street, and Qasr al Bint where your guided tour will end. Climb to the Monastery and/or High Place of Sacrifice on your own.

You will be transferred at the end of the day back to Amman. Overnight Amman hotel including breakfast.

Today you will be transferred to Queen Alia International Airport for departure according to your flight schedule.