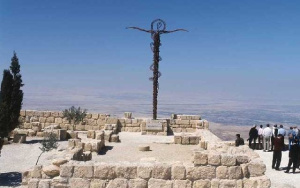 Arrival to Aqaba airport. Meet and assist from our representative who will help you with the Visa process. You qualify for the free Jordanian Visa as you are staying more than 2 nights in Jordan. Our representative will take you to meet your Driver and you will be transferred to your hotel.

Your driver will transfer you 1 hour to Wadi Rum. Enjoy the wilderness adventure of a 4x4 tour of Wadi Rum, following in the footsteps of Lawrence of Arabia, climbing sand dunes and rock bridges.

Start the 04-05 Hours 4x4 tour with our local Bedouin who is your driver. The sites you are going to visit are : Nabatean Temple, Lawrence Spring, Sand Dunes, Khazali Canyon, Little Bridge, Um Frouth Rock Bridge, Lawrence House, and Burdah Rock Bridge/Burdah Arch. You will be provided with a box lunch to enjoy as a picnic doing your tour.
01 Hour Camel Riding is optional from Rum Village to Lawrence Spring (10 JD/15 USD per hour per camel) or you can do it the next day.

At the end of the day, marvel at the sunset and gaze at the stars in the night sky whilst enjoying the legendary hospitality of the Bedouin, before sleeping at the foot of the awesome mountains exploding out from the desert landscape.

Overnight at a Bedouin Camp including dinner and breakfast

Breakfast & Enjoy the Sunrise at the camp.

You will be taken back to the Wadi Rum Village and meet our driver again who will drive you 2 hrs to Petra. On the way you will stop for few minutes for pictures and enjoy the views of the Kings Highway.

Then we head to visit the Nabatean Red Rose city of Petra, one of the 7 world wonders and a UNESCO World Heritage site. Meet your guide at the Visitor's Centre and start to explore the mystic site during an approximately 2.5 hour guided tour. You pass the Siq, a narrow gorge where you get the first close views of the colorful sandstone, ending at the beautiful Treasury. Walk along the Street of Facades to the Royal Tombs, the Theatre and Qasr Al Bint. Free time on your own, then walk the same way back to the entrance gate.

Overnight in Petra at hotel including breakfast

Today you will travel to Amman on the Kings Hwy a route that has been in use for centuries.

Your driver will pick you up from the hotel in the morning and transfer you to Shobak Castle one of the ruined Crusader Castles.

Drive to Karak where you will visit Karak Castle the famous Crusader castle built in 1132/34 by King Baldwin I. of Jerusalem.

Continuing on the Kings Hwy you will stop at the Wadi Mujib viewpoint. Known as the Grand Canyon of Jordan this is an expansive valley and offers great views.

Next stop is Mount Nebo where Moses is said to have stood and looked out to the Promised Land. On a clear day you can look out over the Dead Sea and all the way to Jerusalem.

Then it's a short drive to Madaba. Best known for its spectacular Byzantine and Umayyad mosaics, Madaba is home to the famous 6th century Mosaic Map of Jerusalem and the Holy Land. With two million pieces of vividly coloured local stone, it depicts hills and valleys, villages and towns as far as the Nile Delta. The Madaba Mosaic Map covers the floor of the Greek Orthodox Church of St. George, which is located northwest of the city centre. The church was built in 1896 AD, over the remains of a much earlier 6th century Byzantine church. The mosaic panel enclosing the Map was originally around 15.6 X 6m, 94 sq.m., only about a quarter of which is preserved.

You will then be transferred to Amman.

Overnight at hotel in Amman including breakfast

Drive 50 km in the north to Jerash, the well preserved city of the Roman Empire, often called Pompeii of the East. Initially built by Alexander the Great, the town started to prosper after the Roman conquest, and was one of the Decapolis cities in northern Jordan. You will have a 1.5 hr guided tour in Jerash. Visit Hadrian's Arch, built in 130 AD to honor the visit of Emperor Hadrian. Pass the Hippodrome offering space for 15,000 spectators, the impressing Forum, continue to the Temple of Artemis, which columns are 12 meters high and each drum weights 20-40 tons. Other highlights are the Colonnaded Street and the Nymphaeum.

Then transfer through a beautiful pine-forest and olive groves, reaching the city of Ajloun, here you will find Al-Rabid Castle; the 12th century Castle built by one of Saladin’s lieutenants in the campaign against the Crusaders. You will explore the castle by yourself. It is an easy site to explore by yourself.

Your driver will continue to drive you up North to Um Qais, which is situated on the border with Israel, offering impressive views over the Golan Heights and the Sea of Galilee. Umm Qais is the site of the ancient Greco-Roman city of Gadara, a member of the Decapolis. The city is mentioned in the New Testament as the site where Jesus cast out demons and sent them into pigs, who then ran into the sea. The ruins boast an impressive Colonnaded Street, a vaulted terrace and the remains of two theatres. You will explore this site by yourselves. It is easy to navigate around and the main features have information boards to help you.

You will then be transferred 1.5 hours back to Amman.

Overnight hotel in Amman including breakfast

Amman, is a bustling modern city. The historical places are located in downtown, where we visit the Citadel with remains from the Roman to the early Islamic period. We stroll via the Souq, where you get an idea of everyday life, to the Roman Theatre from 2nd century with 6000 seats.

Free time to explore the souk on your own. Enjoy lunch from one of the many downtown restaurants.

You will then be transferred to your hotel at the Dead Sea. Check in and enjoy relaxing and using the hotel facilities including access to the Dead Sea.

Overnight hotel at the Dead Sea including breakfast.

Breakfast at the hotel. Check out and you will be transferred to Aqaba. Enjoy a short City tour of Aqaba including South Beach, the fortress and museum.

Rest of your day is free.

Overnight hotel in Aqaba including breakfast.

Free day until your driver will pick you up and transfer you to Aqaba airport for your departing flight from Jordan.