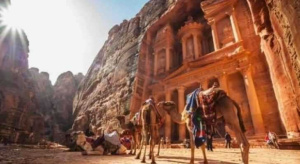 Arrival to Queen Alia airport.  Our representative will meet you before Visa Control with a sign with your name on it. They will take care of all the necessary paperwork for your free Jordanian Visa. They will then take you to meet your driver.

You will be transferred 30 mins to Amman to your hotel.

Drive 50 km in the north to Jerash, the well preserved city of the Roman Empire, often called Pompeii of the East. Initially built by Alexander the Great, the town started to prosper after the Roman conquest, and was one of the Decapolis cities in northern Jordan. You will have a 1.5 hr guided tour in Jerash. Visit Hadrian's Arch, built in 130 AD to honor the visit of Emperor Hadrian. Pass the Hippodrome offering space for 15,000 spectators, the impressing Forum, continue to the Temple of Artemis, which columns are 12 meters high and each drum weights 20-40 tons. Other highlights are the Colonnaded Street and the Nymphaeum.

Then transfer through a beautiful pine-forest and olive groves, reaching the city of Ajloun, here you will find Al-Rabid Castle; the 12th century Castle built by one of Saladin’s lieutenants in the campaign against the Crusaders. You will explore the castle by yourself. It is an easy site to explore by yourself.

Your driver will continue to drive you up North to Um Qais, which is situated on the border with Israel, offering impressive views over the Golan Heights and the Sea of Galilee. Umm Qais is the site of the ancient Greco-Roman city of Gadara, a member of the Decapolis. The city is mentioned in the New Testament as the site where Jesus cast out demons and sent them into pigs, who then ran into the sea. The ruins boast an impressive Colonnaded Street, a vaulted terrace and the remains of two theatres. You will explore this site by yourselves. It is easy to navigate around and the main features have information boards to help you.

You will then be transferred 1.5 hours back to Amman.

This morning your driver will pick you up and you will head north from Amman to the Eastern Desert. You will visit three of the region's famous desert castles built by the powerful Umayyad dynasty in the — UNESCO-listed Qusayr Amra, Qasr Kharana and Qasr al-Azraq.  Qusayr Amra was once an Umayyad hunting hideaway. The impeccably preserved castle is now best-known for its 8th-century frescoes that depict hedonistic scenes of nude women, wine and wild times.

Arriving back in Amman you explore the city on a City Tour.  Amman, is a bustling modern city. The historical places are located in downtown, where you visit the Citadel with remains from the Roman to the early Islamic period. Located at the Citadel is the Archaeological Museum. You will stroll via the Souq, where you get an idea of everyday life, to the Roman Theatre from 2nd century with 6000 seats. Your driver will be with you to transfer you to the sites on the Amman City Tour but the driver cannot enter the sites with you. If you would like a guide for the Amman City tour this is additional cost of $70USD for 03 hours.

Today you will travel to Petra on the Kings Hwy a route that has been in use for centuries. Your Driver will pick you up from the hotel at 8:00 and transfer you to Madaba . Best known for its spectacular Byzantine and Umayyad mosaics, Madaba is home to the famous 6th century Mosaic Map of Jerusalem and the Holy Land. With two million pieces of vividly coloured local stone, it depicts hills and valleys, villages and towns as far as the Nile Delta. The Madaba Mosaic Map covers the floor of the Greek Orthodox Church of St. George, which is located northwest of the city centre. The church was built in 1896 AD, over the remains of a much earlier 6th century Byzantine church. The mosaic panel enclosing the Map was originally around 15.6 X 6m, 94 sq.m., only about a quarter of which is preserved.

You will also visit the Church of St John the Baptist which is recognised as the shrine of his beheading. For those not afraid of heights the view from the top of the bell tower is one of the best in Madaba. There is also the Acropolis Musuem housed in ancient vaulted rooms underneath the church and includes an operational well dating back 3000 years to the Moabite era.

You will then proceed to Mount Nebo where Moses is said to have stood and looked out to the Promised Land. On a clear day you can look out over the Dead Sea and all the way to Jerusalem.

You will continue to Dana Village. Explore the area on the Dana Village hike (available all year round). This trail winds above the Dana Village and through the terraced gardens and local craft workshops. Visitors can meet the local residents, see original Ottoman architecture, and learn more about Dana's rich history. Option of employing the services of a local guide for $15USD/10JD per person. During March to Oct there are other short self guided or guided hikes that are available.

Breakfast at the camp.

Depending on the time of year you might like to go on another short hike this morning or there is the chance to join in some optional traditional activities at the Eco Camp (please see this link : https://web.facebook.com/pg/WadiDana/services/?service_id=1105775049515856&ref=page_internal

You will continue to Little Petra. You will explore Little Petra which has some fine examples of Nabatean Tricliniums and biclinium, or dining rooms. There is the last known surviving Nabatean fresco work on the ceilings of one of the bicliniums.

Today , visit Petra , This fascinating ancient Nabatean capital dominated long time the Arabian trade routes, and is a must see in the Middle East. With your English speaking guide, walk through the 1.2km long Siq (chasm), passing shrines, tombs and carvings, to reach the lost city of Petra. See the magnificent Treasury as you exit the Siq, explore the Street of Facades, Roman Theatre, Colonnaded Street and end your 03 hour guided tour at Qasr Bint. You will then have free time to explore further on your own. There are still plenty of places to see such as the Byzantine Church, Temple of the Winged Lion’s and you might like to climb the 800 steps  to the Monastery or the shorter climb to the top of the High Place of Sacrifice.

Overnight Hotel in Petra including breakfast

Breakfast at the hotel

Your driver will transfer you 02 hours to Wadi Rum.

Our English speaking Bedouin Guide will meet you at Wadi Rum Village. Enjoy Bedouin hospitality with tea, coffee etc and have the opportunity to meet at Bedouin Family (Guide's family).

You will enjoy a box lunch during the jeep tour.

Marvel at the sunset and gaze at the stars in the night sky whilst enjoying the legendary hospitality of the Bedouin, before sleeping at the foot of the awesome mountains exploding out from the desert landscape. BBQ Dinner & Overnight at a Bedouin Camp.

Enjoy breakfast and sunrise at the camp.

Optional activity : See Wadi Rum from a birds eye perspective on a sunrise hot air balloon ride. The balloon ride takes places between 6:00 - 7:00am. $185USD per person. Bookings must be made in advance and the ride is subject to availability and if it is available subject to weather conditions.

You will be transferred 3.5hrs the lowest point on earth, the Dead Sea, along the Dead Sea Hwy.

Enjoy the rest of the day relaxing and using the hotel facilities including access to the Dead Sea and experiencing the unique sensation of floating in the salty waters. .

Your driver will pick you up from the hotel and transfer you 01 hour to Amman Airport for your departing flight.

If you want, you can upgrade your accommodation to stay in 4/5* hotels – just let us know.