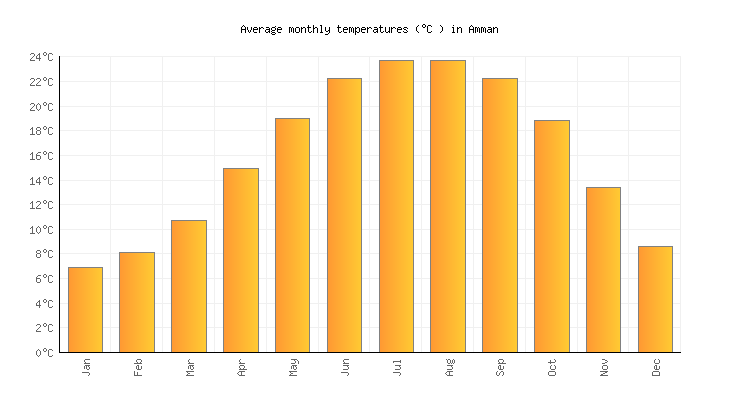 What will the weather be like for my trip to Jordan?

You are able to check the weather forecast for your time in Jordan at the following sites and enter in the different locations you will be visiting in Jordan:

Jordan is a relatively small country with a total land area of 96000 sq km. Although mostly desert, within its compact area, there are 3 distinct climatic zones; the Jordan valley, Mountain Heights Plateau and the Desert or Badia region, which constitutes 75% of the total land area of Jordan.

As the majority of the country is desert the country has predominantly long, dry, hot summers with chilly nights and cold, crisp winters. Rain in the desert regions is sparse, falling in short, intense bursts during the winter and spring. The most fertile part of Jordan is the hilly region in the northwest which experiences high rainfall between November and March when weather fronts blow in from the Mediterranean.

To the west of the hills lies the long valley where the River Jordan flows into the Dead Sea, which is 400m (1,300ft) below sea level. This valley has very hot summers, warm winters and little rain. Expect sun throughout the year in Jordan.

Jordan’s weather truly consists of 4 seasons: Autumn, winter, spring, and summer. Most of Jordan’s tourist attractions lie in the mountain heights Plateau, strip which runs along the western edge of the country, and the Jordan Valley, which lies next to the Dead Sea; the lowest point on the surface of earth.

Jordan is a very sunny country, with over 310 days of sunshine a year. The weather is almost exclusively dry and sunny from May to October, where there is barely any rainfall. Summers are hot but relatively pleasant due to the low humidity in the mountain heights with daytime temperatures frequently exceeding 36°C and averaging about 32°C, while nights are almost exclusively cool and pleasant. In the Jordan valley, summers can be very hot with temperatures reaching into the low forties on occasions, while Aqaba’s weather in the south is similar to the Jordan valley’s but with less rainfall.
The desert of Wadi Rum on the other hand lies on a plateau that is around 900 metres above sea level (the highest peak in Jordan, Um Al Dami, lies within Wadi Rum). With no vegetation to dampen its climate, it can be very hot in the summer, and very cold in winter. Some winter nights there can be brutally cold.
One thing you will notice in Jordan, is that there is very little humidity, which hovers around 30-40% on average. This helps keep the summer heat bearable.

It can get “cold” in Jordan and it even snows!

Most of Jordan’s desert receives less than 120 mm of rain a year, while the average rainfall in the mountain heights ranges between 300 and 600 mm a year. The rainy season begins at the end of November and continues till the end of March. Nonetheless, rainfall is sporadic even then. Chance of rain drops substantially from April onwards. The coldest months of the year are December and January, where temperatures average about 13 degrees Celsius but can drop to around 5 degrees. In areas with an altitude of 1000 meters and above, there is a chance of snowfall in winter, and some lucky few have even had the chance to see Petra (1200 meters above sea level) in the snow.
In brief: Hot and dry summers with cool evenings.
The Jordan Valley below sea level is warm during winter and very hot in summer, Aqaba has a drier climate than the Dead Sea (with temperatures on average 10 degrees Celsius above those of Amman). Rain falls between November and April (mostly in the central and northern mountain ranges), while colder weather conditions occur in December / January.

Local daytime temperatures in Amman range as follows for the year (°C). The Dead Sea and Aqaba are around 8-10 degrees higher on average: