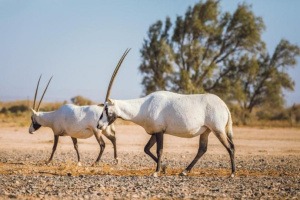 Pick Up Point /Starting from  : Amman Hotel or Residence

Your driver will pick you up and you will head north from Amman to the Eastern Desert. You will visit three of the region's famous desert castles built by the powerful Umayyad dynasty in the — UNESCO-listed Qusayr Amra, Qasr Kharana and Qasr al-Azraq.  Qusayr Amra was once an Umayyad hunting hideaway. The impeccably preserved castle is now best-known for its 8th-century frescoes that depict hedonistic scenes of nude women, wine and wild times.

Near Azraq is Shaumari Reserve which was established as a breeding centre to reintroduce wildlife to the regions such as endangered Arabian oryx, Persian onagers (wild ass), Dorcas gazelles and houbara bustards. You will go on a safari trip at the reserve.

Next you will visit the Azraq wetlands which have an abundant of wildlife/birdlife.

Rate Per Person in Private Tour in $USD  :

Self guided hike at Azraq Wetlands

Mineral water on board of the vehicle.